Good news comrades, the Nazi's are broken and retreating.  We are now in German territory and the war is close to its end.  All you have to do is advance into the next village and secure it for follow on units to move through and continue the advance.  Resistance is expected to be negligible. Za Stalina - onwards to victory!

9/9/21 With most of 'the chaps' away on holiday or attending other clubs (the traitors will be purged) gamers are short on the ground.  As such the plan was for Comrade Commissar Dave to lead his men Comrade Fred and Comrade Greg against an umpire controlled enemy.  Sadly as the game grew closer work demands claimed both Greg and then Fred.  Comrade Cadet Barney was hastily recruited in their place.  There is no manpower shortage in the Red Army!

Initial reconnaissance saw no Germans on the table.  Both T34/85 advanced cautiously along the north of the battlefield, reinforcements were promised - eventually. 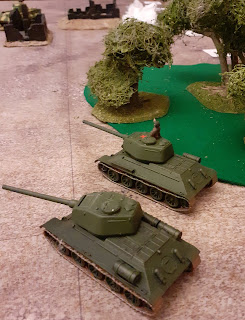 Midway up the table Dave managed to spot the first German blind, surely it would just be a group of villagers out for a picnic?  Nope it was a Stug lurking for the unwary 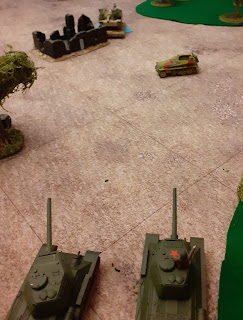 Both T34/85 turned to engage and a slugging match ensued.  Plenty of hits were achieved but the shells just didn't want to go through the armour.  Fortunately the German armourers seemed to have gone to the same supplier.

With the battle in danger of stalling Comrade Commissar Dave led the way by advancing into the attack.  The Stug was forced back.  Dave advanced again with victory in his sights.  Wait a minute whats that on the flank? 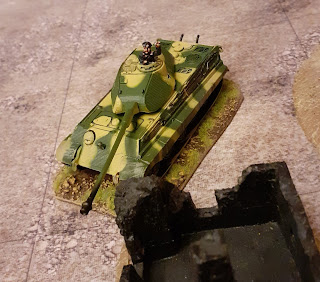 The T34/85 was a superb combat vehicle, well armed and armoured with excellent cross country mobility, it was arguably the tank which secured victory for the Soviet army.  However parking one with its flank towards a King Tiger was only going to end one way.  Scratch one T34/85. 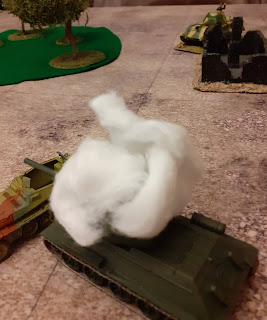 Comrade Commissar Dave was seen running to the baseline to commandeer the next T34/85 to enter the fray.  Meanwhile Comrade Cadet Barney faced the Stug and King Tiger alone, plus a German blind advancing from the rear through the woods.  Spinning his T34/85 around Comrade Cadet Barney headed into the woods to seek out the lurker behind him and definitely not to hide from the King Tiger on his flank.  A group of German charcoal burners scattered before him.  Comrade Dave in his shiny new tank entered the table near the south and chanced a long shot into the flank of the Stug.  Hit.  Sadly Stug armour is not as strong a it could be and the once mighty Stug was reduced to wreckage. 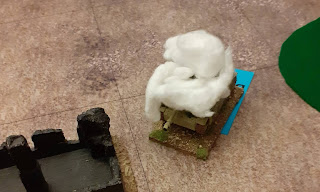 Continuing his advance up the table Dave managed to draw a bead on the final German blind,  The mobile field kitchen decided discretion was the batter part of valour and ran away.  With only one German tank against two mighty T34/85's surely the game was in the bag for the Russians.  Shame its a King Tiger though.   Both Russian vehicles start playing 'drive behind the German' in an attempt to get in a rear shot.  The King Tiger refused to co-operate and got a flank shot on the Comrade Cadet.  Another dead T34/85 and the centre of the table starts to look like a scrap yard of dead armoured vehicles. 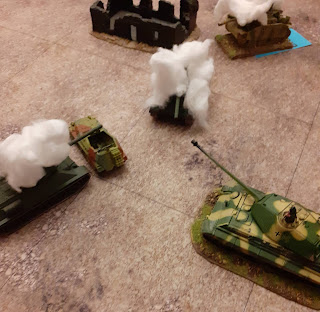 A fourth T34/85 arrives at the baseline and Comrade Commissar Dave continues to circle his prey.  The fourth T34 races up the table to try and keep the pressure on the King Tiger but CC Dave finally manages to get behind the monster and to put a shot into its rear.  Kampfgruppe Commander Chris is initially scathing about his efforts, but wait don't 3's count for a rear shot? They do and there are a lot, 12 armour dice are rolled and only two saves are made - not enough and the King Tiger is finally knocked out. 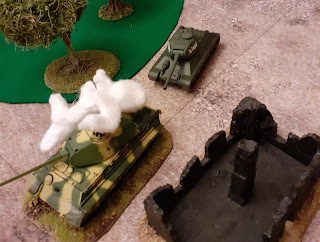 With only two burning T34/85 on the table losses are deemed to be acceptable in exchange for both a Stug and King Tiger.  Victory to the forces of the Rodina!