An easier travel plan for our reporter this week, as he travelled from the Libyan/Egyptian border of late 1941 to the desert of Mesopotamia in Summer 344AD. This was going to be a hot one. The Sassanian King Shapur II had launched at attack on the Roman frontier seizing the fortress of Singara. The Emperor Constantius II has come in person to command his armies and restore Roman martial pride. Phil, Tony and Fred took the Sassanids, with Chris, Rob and newly recruited Tribune Barney the Romans. With both sides fielding double-armed units, both sides had a relatively low unit count and only a small number of victory medals. 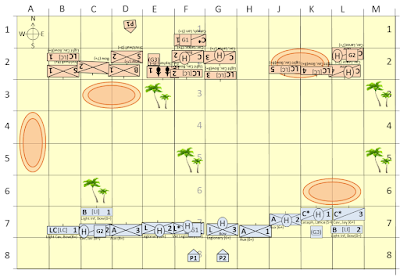 The Sassanids started by seizing the ridgeline on their right flank whilst pushing aggressively forward on the left. 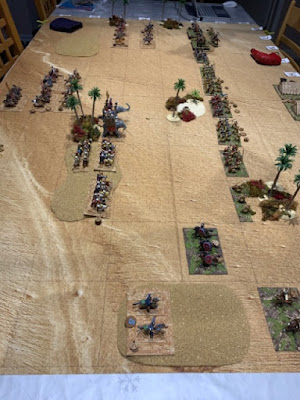 The centre was curiously static. It must be a ruse. 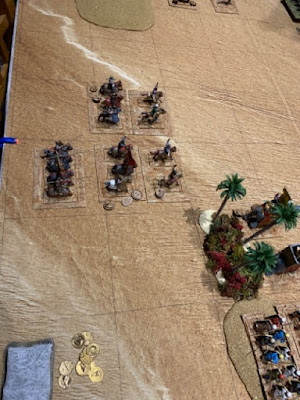 The Romans advanced in good order, albeit a tad slower. Tony again pushed the Sassanid left forward showering Chris mighty Cataphract unit with arrows, one of which amazingly scored a hit. This seemed to un-nerve the Roman senior commander. 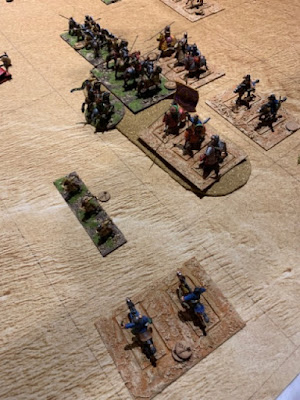 He was even more worried when his cavalry were also hit and died, leaving his wing exposed. Worse was to follow as Phil deployed the “lost” Stratagem and managed to bring his unit of light cavalry onto the table straight into the Roman camp area. Five coins lost and none captured for the Romans. 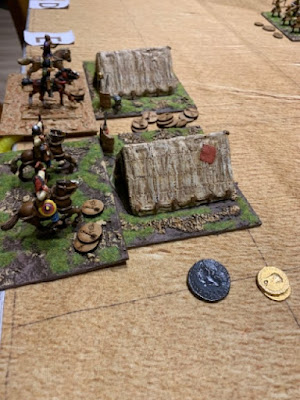 The Roman left and centre manfully fought on, but realised that their right was in danger of collapse and the Sassanids were in their rear area. Nasty! 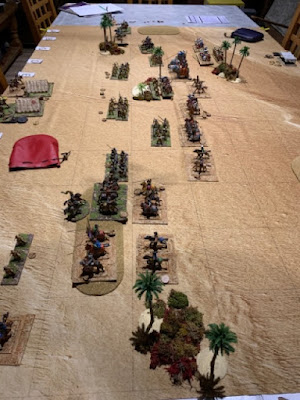 Chris finally managed to deploy his “reserve” light cavalry to save the second Roman camp, but the situation on the left continued to worsen. The cataphracts were finally destroyed as were the light infantry, and the flank was turned. The sole Roman success occurred in the centre where Rob’s legionaries managed to destroy some of Fred’s cavalry which had rashly advanced into a palm grove. Cavalry fighting in broken ground is never a good idea!

The end for Julian came soon after. A unit of Auxilia was broken and Tony’s massed cavalry attacked an exposed Legionary unit. 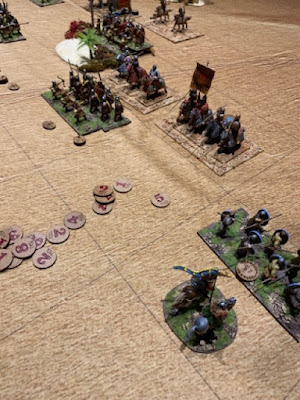 A Sassanid victory 11-2 and a comprehensive defeat for Rome.

Labels: 28mm, To The Strongest