Difficult time for the British at Lucknow

Last night saw our indefatigable reporter travel from the Balkans in the 4th century AD to a sweltering and humid Lucknow in the Summer of 1857. The “Indian Mutiny” or “First War of Independence”, depending on your point of view was in full swing and a mixed force of Sepoys and local Badmash converged on the Lucknow Residency intending to repeat the barbaric acts being perpetrated all across Northern India. 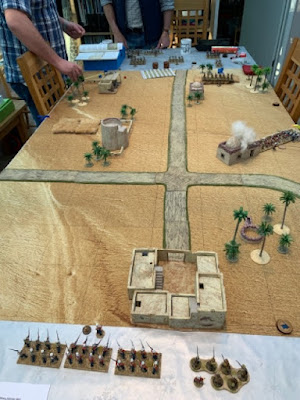 Dave and Chris commanded the British, with Greg and Tony trying to command the Mutineers. The Indians started by deploying and then charging their cavalry across the table. The British got lucky, as Captain Banks, recently arrived from public school, deployed their gun and immediately fired canister at short-range into the Indian horse. 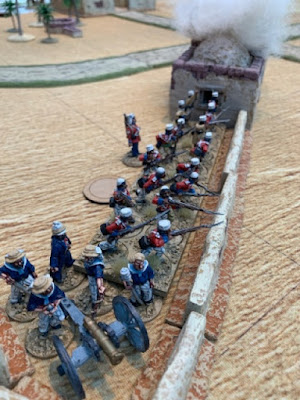 Tony hadn’t spotted the location of the 2nd British deployment point! Carnage followed as the Indians broke and ran, and force morale plummeted. Loyal Sepoys flanked the British gunners, turning the position behind the wall into a veritable redoubt which dominated the left side of the table.

The Mutineers decided to give the British artillery a wide berth and concentrate their attack on the other flank. Tony persuaded Greg to charge his Badmash musketeers into Sir Henry Lawrence’s civilian volunteers. 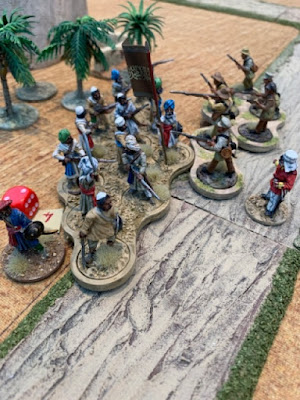 Miraculously the civilians won the encounter and the Badmash retreated losing their so-called officer in the process. Things were looking grim for the Indians, both as regards troop losses and command harmony!

Major Buchanan, the gnarled Scottish alcoholic deployed his line of three HEIC units in the centre, blocking the road to the Residency. Tony responded by creeping his Sepoys forward hoping to stay clear of the withering artillery fire. 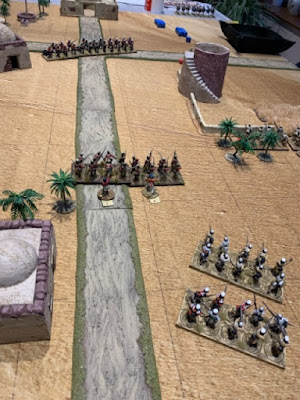 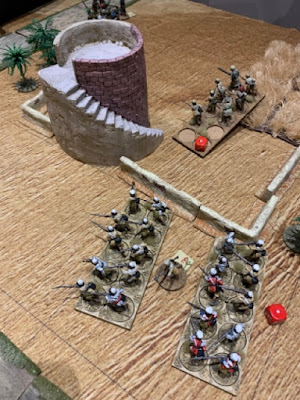 Eventually the Indian numbers started to tell. The Commissioner’s civilians lost men and took shock, whilst the Indian artillery deployed and began to pour round-shot into the British units holding the centre. British casualties mounted, whilst the Indian units accepted their losses but continued their business. Life is cheap in the Indian subcontinent.

After its initial success, the Naval gunners proved less effective as a “Random Event” happened and they found themselves shrouded in smoke. Tony was emboldened to start an advance through the centre and Greg began to make progress on the Indian right. Musket and artillery fire continued to weaken the HEIC infantry who eventually retreated losing force morale. 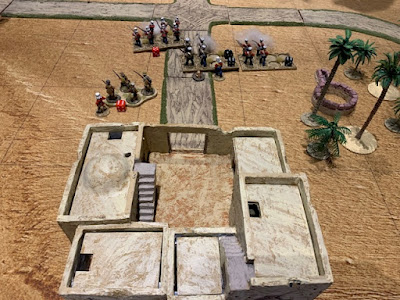 After two-and-a-half hours gameplay the battle was deemed an Indian win. Despite their inauspicious start with the destruction of their cavalry in the first turn, and the fractious command discussions between the Indian leaders, somehow the Mutineers snatched victory from the jaws of defeat.

All in all a fun game which everyone seemingly enjoyed. I sense more Indian Mutiny figures will soon be on order.