Rome vs the Goths, a reprise

After missing last week’s Gothic humiliation, our seasoned reporter donned his walking boots and hot-footed it to the Balkans to witness the next episode in the Gothic-Roman wars. This time Chris and Tony took the all-conquering Romans with Dave and Simon trying to restore the sagging morale of the Goths.

The Goths lost the scouting and set up first. They went infantry-heavy on their right, with the cavalry evenly distributed I the more open centre and left. The Romans countered with a cavalry-heavy right, legionary-heavy centre with the Auxilia and some lights taking the Roman left.

Battle commenced with a brisk Roman advance all across the line. However, they couldn’t quite get into bow range. The Goths responded pushing the infantry forward to occupy the high ground to their front, and bow into the woods. The Gothic cavalry pushed forward into the teeth of the Legions and Roman cavalry. This would be a tough one with very little room for manoeuvre. 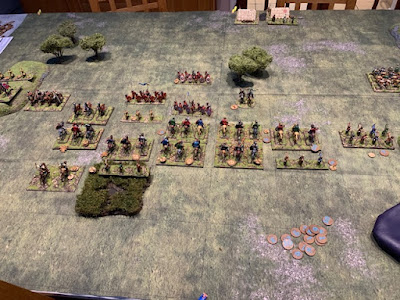 Chris on the Roman left instantly drew a “1”. His cry of “General re-roll” saw another “1” pulled from the bag. Chris wept and everyone else laughed. We didn’t know that Greg’s powers were so strong. His influence obviously stretched all the way from Malta. Tony took the Roman cavalry into action and managed to send lights round the Gothic flank, his normal tactic. 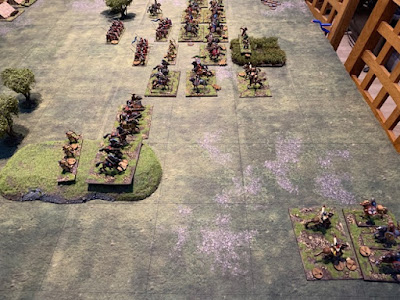 However, the Gothic commanders wondered if he had noticed that the Gothic camps were on the other side of the table? The Goths replied with an arrow storm from their infantry that killed Chris’ light infantry and disrupted two Auxilia.

The next turn saw more of the same. The cavalry battle between Dave and Tony intensified with disruptions on both sides but no decisive “kills”. The Gothic cavalry and Legionaries continued their sparring with the Goths electing to throw javelins rather than risk a charge into the serried ranks of heavily armed and armoured Romans. 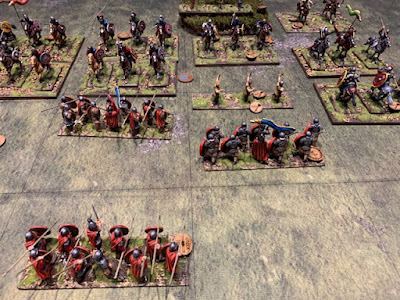 On the Roman right Chris failed to rally his Auxilia and two units fell to more Gothic archery. The morale test saw a light cavalry unit also break. Things were looking distinctly “sticky” as the Roman left all but collapsed, and the Gothic warriors surged off the hill towards the enemy. 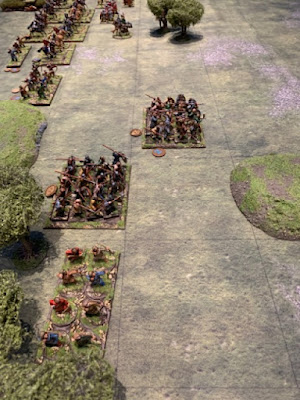 However, the Romans finally managed to kill some of Dave’s Gothic cavalry, but too little too late. Chris’ left-wing command was completely wiped out and a lone unit of Gothic light infantry marched through across the board to seize the camp. 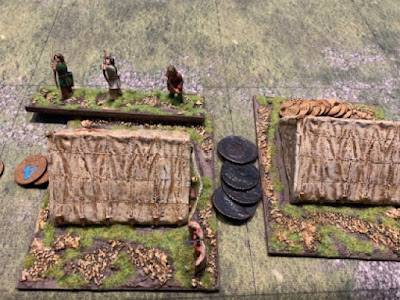 Wow! A real beating for the Romans. 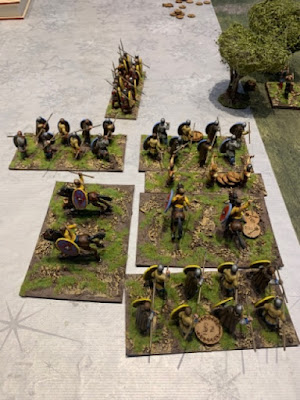 The Goths celebrated the victory of Arian Christianity over the heresy practiced in the Roman Empire, or was the Roman General still secretly pagan?

Labels: 28mm, To The Strongest

Hi, would love to see closer ups of the figs please and in particular the Romans in their cloaks in pic 3/6 Can i also ask who the manufacturer is please. Thanks ps no idea whose email is listed below, however its not mine.